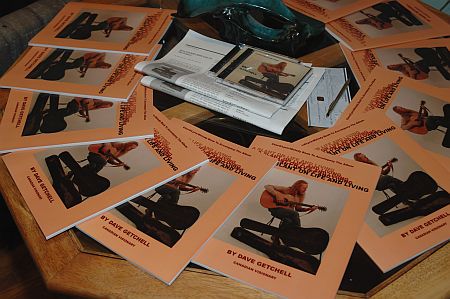 The Fortress Of Freedom Corporation is excited to announce that Dave Getchell's Book "A Slant On Life And Living" is officially released! The ceremony to release the book for sale took place at the Getchell residence with Dave surrounded by his family. Dave then entertained us by playing a sample of the music in the book and then signed copies for me to give to the other musicians. 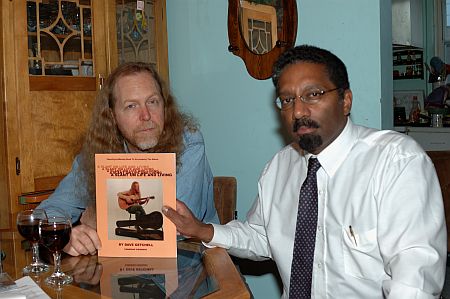 "A Slant On Life And Living" is primarily a book of music based on Dave's first album by the same name released in 2005. The book alternates from text to real musical lyrics and notes. Dave stated that the hardest parts were notating the long songs. In any event, Dave finished his first book and is now looking toward his next projects. All of us at FOF congratulate Dave Getchell on his accomplishment and expect more from this talented singer/songwriter in the future. 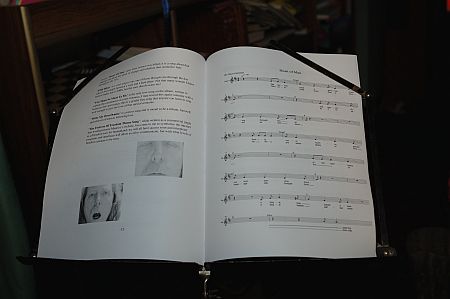 FORTRESS OF FREEDOM: BRINGING THE MASS MEDIA TO THE MASSES!

Our First Book Is Published!


The Fortress Of Freedom Corporation is pleased to announce that we have just published our first book: Protest! The Fall Of Civil Disobedience


More of a test mule and corporation product; this book represents the work of our membership and the material this organization has produced since our first protest. At 207 pages, it was a little larger than we first envisioned but that was the way the book had to come out as it was achive material. I have to say that I am pleased with the result! 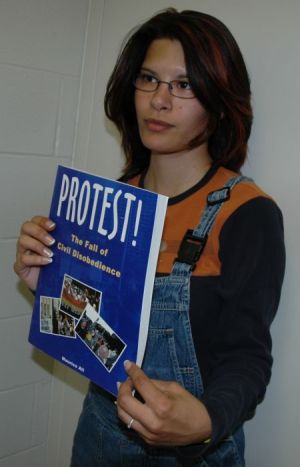 One of the biggest participants in this project was one of our very own members: Pet. Pet is one of the most gifted artists that I know. She therefore, was first choice when it came to making the cover for the book. The cover is one of the most important parts of a book as this is the first thing a casual observer sees when they chance upon the book. I am pleased to say that Pet's cover is one of the best I have seen. If you look closely, you will see that the background is actually one of my photos in blue. The other graphics are more photos on photos (as this is a book about photojournalism), this kind of artistic merit does not come by chance..... 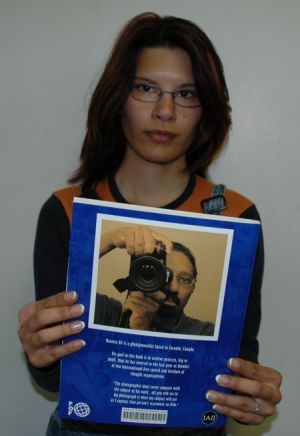 She met the technical requirements perfectly and the final product came at the required measurements and the crispest, sharpest definition possible. The photos do not do the book justice; I guess I will have to scan the sides to show for best clarity. Hats off to Pet! She runs a design store/web site and you can see for yourself by going to: http://petserrano.com. Once again, splendid job Pet! 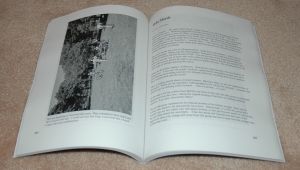 A very big thank you to the directors, journalists and members who helped and supported the project from it's inception; you folk are the greatest! Thanks to all who took interest in this project; and to all those who had their images archived as they practiced their right to free speech! It took longer than anyone thought, but we are proud of the final result. The book came at a bad time and will be overshadowed by the TV show; but these are the problems I don't mind having.....if you know what I mean.....